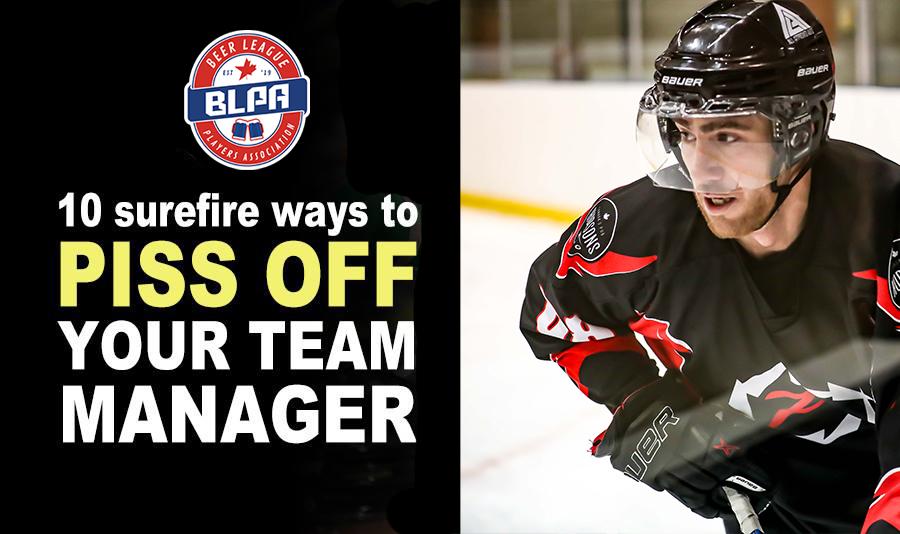 Do you hate your beer league GM? Remember that time he only filled five of your team’s six water bottles? How about the time he got your team’s league fees in one day late? You just know it’s his fault your team has all those late games, right? Maybe he’s never done anything bad to you, but you just hate him for no good reason. Try these tips to fast-track your way to the GM rage-quitting your team.

Easy… don’t pay. You probably go through about 10 or 1,000 excuses before making your league payment, anyway. If you’re going to put in all that effort, just finish the job. Don’t pay any money for your next season. This will piss off your GM and you’ll get free hockey. Win-win, eh?

No-show to games. Just don’t go. You likely haven’t paid yet so just ghost on a few games. There are a million other things you can be doing besides playing ze puck, right? Laundry, pizza, beer, getting shot down on Tinder. Just do that stuff. Your GM will hate it. Bonus points because your teammates will hate it, too.

Even better than no-showing? Tell your GM you’re not coming to the game so he calls out a few subs. Then show up anyway… and bring a friend. As a GM, nothing is more infuriating than working to find 10 skaters and then having some ass-wipe mess it all up by showing up out of the blue.
As a tangent… Is everyone in agreement that 10 skaters is the perfect number of skaters for beer league games? If you disagree, you’re wrong.

Don’t commit. You’re a precious bird and you refuse to be caged. Why should you commit to anything? Keep your options open. Most GMs like to have everything planned out. They want to ensure their players will be at practice, games, or parties. Always being non-committal is sure to give your GM a nervous twitch.

This is your beer league and your experience is all that matters. Demand that you will only play if you’re on a line with the two top scorers. This will ensure you’ll pick up plenty of secondary assists. At first glance of your league’s stat page, you’ll look like a quality hockey player with all those points.

There is one oft-overlooked dilemma in beer league: keeping up with your jersey. On one hand, you can choose to not wash it and have to marinade in your stench all the time. On the other hand, it just takes so much time and effort to toss your jersey in the wash. How do you solve this problem? Just don’t bother to take your jersey to games. Your GM will LOVE this. Your GM’s idea of fun is definitely toting around 10 extra jerseys to the game, then having to carry them home to wash your stank off them. Here’s a pro tip: don’t even buy a team jersey. Obviously your GM has extras so why should you spend your hard-earned cash on a jersey?

This is beer league. As in, adult hockey players coming out to play puck and drink beer. There’s an understanding that there will be a few (or more) games that start later than you’d like. Most of us beer leaguers just deal with it. We play, have a beer, and struggle through the early morning at work. All good. Not for you, though. One surefire way to get under your GM’s skin is to never show up for those late game. You’re a growing boy or girl after all, you need your rest.

A lot of these are off-ice suggestions to piss off your GM. Now, here’s an on-ice way to really endear yourself to your team’s fearless leader. It’s time to start leading your team in PIMs, and we’ll give you some solid reasons. First, it’s awesome to lead your team in at least one stat. Plus, your league probably has a couple cute timekeepers, right? No better place to spit your game than in a locked box where she can’t avoid you, right?

Some GMs like to run the team like a democracy. This is a mistake, but if your GM runs this kind of ship then always be the dissenting opinion in the dressing room. Is your team all in for the pizza joint after the game? Not you! You demand fried chicken. Is your GM pushing hard for the team to get new jerseys? Nope, the logo hasn’t even completely faded off the current ones. If your goal is to get the GM in a frenzy, there’s no better way than to be “that guy” in the dressing room. If you really want to stir the pot, you could also start a rumor about the GM pocketing some cash. That’ll get the boys’ blood boiling!

This is the thing that GMs hate the most. Take notes because if you do this, it’s like adding the previous 9 tips up into a ball and dropping them on a GM at once. Close your eyes and take yourself back to the locker room at the end of last season. The GM probably stands up says something like, “thanks for a great season, next season starts in a couple weeks. We need to start collecting cash.” Most of the boys are excited because next season can’t be any worse than the single-win stint you just had. Inevitably the GM will hear the words that he can’t stand. “Hey bud… Is it cool if I just sub next season? I will only be able to make a few games.” Sounds innocent, right? Any GM who’s been in the game for a while knows exactly what this means. Every week this guy is going send text messages starting 5 days before the game asking if the team needs him this week. Just the buzz of the GM’s phone will eventually be enough to make him snap. It’s the perfect way to break the proverbial camel’s back.

There ya have it. If you want to piss off your team GM then use one, two or all 10 of these tips. Got any other tips? Are you a team GM and have had these happen to you? Leave us a comment below to share your experience. If you’re a hockey player SHARE THIS! Make sure you check out someone our beer league hockey tournaments too…. but not if you use any of these tips on the regular.

See you on the ice! Be kind to one another.