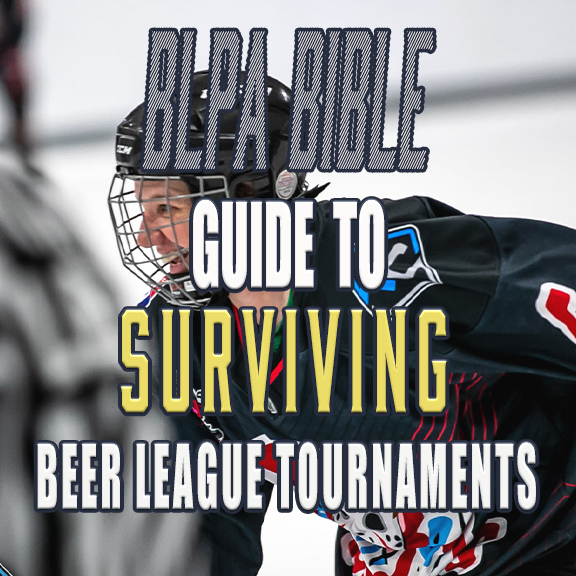 Beer League Tourney weekend is upon the team and the boys are buzzin!

But you’ve got concerns. You’re not 21 anymore. Partying all weekend used to be your lifestyle but now it’s more a distant (but beautiful) memory. These days party weekends mostly turn into 5-day hangovers and wondering, “how did I use to do this every weekend?” Surviving a tourney like the BLPA Bash or a Draft Experience begins with attitude. Let’s get that “I’m not a spring chicken” BS out of here. You must prepare. Physically, emotionally, and spiritually. Words like “morals” and “hesitations” should be abandoned. Excessive obscenities? Alcohol abuse? Threesomes? Safe words? Nick’s package? We make no promises, but odds are good you’ll encounter some of these. Whether that’s a good thing is where attitude comes in.

Hockey tourneys are basically summer camp for adults and like any good boy or girl scout will tell you, always be prepared! To help you do just that, we’ve gathered a list… nay… an OFFICIAL GUIDE OF BLPA tourney tips from a well- seasoned and hardened weekend warrior. We might as well consider this the first insert for the BLPA BIBLE.

Don’t be a dummy. Sharpen the skates before the tourney. And don’t plan on the day before. That never works out. Plan a few days out. Running around town prior to first night puck drop cuts into drinking time. And that my friends is quite frankly, unacceptable

Again, don’t be a dummy and try to start the day before. Start a week before. Load up on water. It’s good for you. I have a feeling I need to be extremely specific here. I do not mean drink a couple extra tall boys a night leading up to a draft tournament or team tournament. But I’m also not saying don’t drink a couple extra tall boys a night leading up to the tourney. What I’m saying is mix in an extra half gallon of water or so a day. Why? Because water is good for ya. It keeps them muscles feeling good and will (probably) help with your stamina should you lead your team to the championship game. Trust me I’m a scientist. Ok self-proclaimed scientist. But once I did talk to an actual scientist about this on the BLPA Big Show. Listen to that here 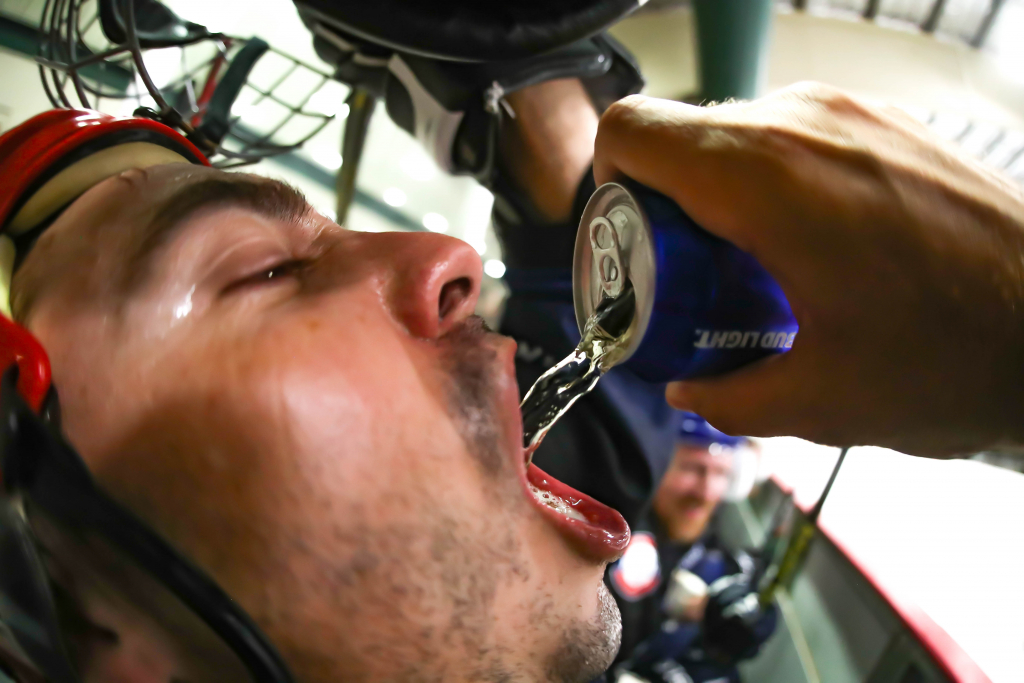 I know you have your lucky pair of socks. You wear them every game but the multiple games played at a Draft Tournament (DEX) in one day means those lucky socks are likely soggy the next time you lace up. So do yourself and your equipment a favor and buy multiple pairs of the same socks so the piggies are always fresh in the wheels.

Plus recently in the Beer League Players Association Group a member posted about getting a staph infection from playing in dirty gear. Wash your socks and your gear prior to the tourney.

Or 3 or the whole damn team. Here’s a little-known secret. Hockey tourneys aren’t all that much about the puck. The journey there and back are where the real memories are made. So get a carpool plan in place and execute it. If the budget allows, may I suggest  springing for a camper for the weekend? I spent most of 2020 traveling around in the DEXexpress from one Draft Tournament to the next Draft Tournament. It was incredible. I was driving solo but I bet having friends along would have been incredible. I’m going to go in a corner and cry now.

Drink cheaper by knowing your booze prices. Driving to a province or state with higher liquor taxes? Stock up before you leave home. Canadians heading over the border to the US, even with shitty exchange rates you’re probably still better off buying down there. You’ll be kicking yourself if you end up paying twice the price for the same 30 rack. Sure at our Draft Tournament Experience we give you some free beer but having cheap booze back at the camper or hotel is essential.

Know where the closest food (McDonalds) and booze spots are (liquor store). Maybe you pride yourself on being the team mooch. But likely you don’t. You don’t want to start off the weekend getting the moniker of Moochy. But I can promise you that if you show up with beer and food for the boys at any point during the tournament you will be on your way to being called a LEGEND. And sure, sober you is a stuck-up dick who’s too good for McD’s but come 2am you won’t hesitate to shovel Mcdoubles down your throat. Be warned the ice cream machine at 2 AM will be broke BUT…. Its always worth a shot.

3 words; Complimentary Continental Breakfast. Book a hotel with one. Your hungover ass ain’t too good for free hotel breakfast food. Remember, you ate 2 AM Mickey D’s last night. But seriously, if your squad got stiffed with an early game on Saturday morning you’re going to want something easier than those puck bunnies that followed the crew back to the hotel last night.

Keep a bunch bananas and protein bars on the nightstand. When morning hits and you’re hurting so bad you can’t even crawl to the toilet, you still need to get some fuel in you. Keep those emergency reserves within reach. Bananas are scientifically proven to help you recover from a night of drinking (as are eggs, if you can find your way to a real breakfast joint). The protein bars are just a staple in a hockey player’s tourney kit.

Do not overlook this golden piece of beer league advice. No matter what. Right before your head hits the pillow for the night chug a bottle of water (or even Gatorade will do) and immediately do again upon waking. This will make a hue difference in how you feel on the ice and will help getting ya to sweat out the booze.

Pepto-Bismol and Advil are your new best lineys. Those bottomless margs were going down so smooth the night before, but now they’re about to come back up with a vengeance. The Pepto will help settle your stomach so you can fuel up for the game – it’s vital you eat. VITAL. SO GET SOME IN YA. When your head is pounding harder than your top grinder it’s crucial you take Advil, or any ibuprofen – IMPORTANT WARNING – DO NOT TAKE ACETAMINOPHEN! That is genius talk for Tylenol, incase you were wondering. Most of Tylenol is converted in the liver, which at this moment is under siege from all the liquor you threw at it the night before. Advil is safer. Take it in the morning, it won’t help the night before. YAY FOR SCIENCE.

Always room with someone with a similar post game style. Some don’t have problems going til 3 in the morning and being on the ice at 8 am. Nothing can cause beer leaue team drama than more than pairing that player with your early-to-bed boys. When good-time-charlie brings the party back to the room, your literal sleeper pick will be ready to ring a puck off his head. Be smart, pair with a party buddy who makes sense. 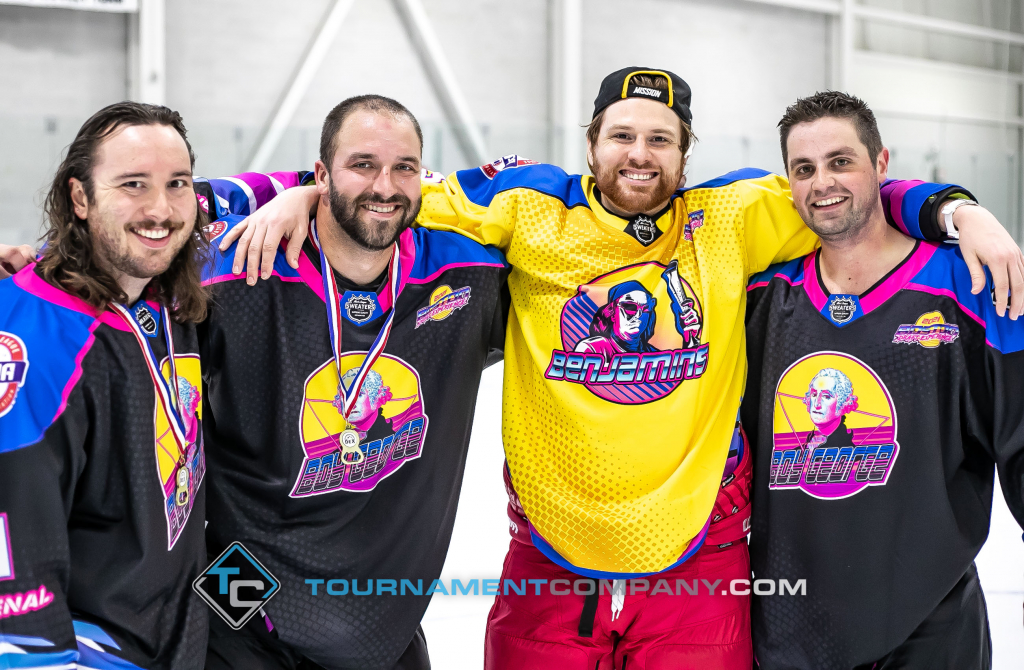 There’s no point in being at a tourney with the squad if you’re not gonna play games with the squad. Yes your headache says you stay in bed and miss the first game but don’t do that. You made a commitment to the squad play and you have to have their backs. Work Hard; Play Harder. Commit to both or Stay the fuck home.

Have fun, we all paid to be here and have a good time. Don’t ruin that. You need to read the tone on the ice. If you’re in a division where you’re prime to dominate, maybe you don’t need to hammer clappers from the point all day. Everyone is just there to drink some beers after the game and that’s way harder when you’re in a hospital bed. The nurses don’t take kindly to slipping beer into your IV, trust us.

Liquor before the game and you’ll feel the shame. Beer before game start hits the mark. Leave the hard stuff til after games. Playing drunk sounds fun but it’s not. And it’s not safe for you, your team, or the opposing teams. A few beers before puck drops makes everything fun. Besides ‘sex on the beach’ shots are for winners anyway. Take care of business on the ice and get rewarded with your fruity shots afterwards.

This is a real pro beer league tip. Like it or not, someone on your team is gonna yak. It’s inevitable. Keep a small trash with ya on the bench. No one wants last night Mcdoubles and Margaritas on their skate laces. At a Draft Tournament (DEX) we call this the DEX Flu.

If you’re asking what that is, you’re already in trouble. A weekend of greasy food sounds appealing, but your muscles will recover better if you throw in some of the green stuff. Spinach, broccoli, leafy greens, and even get crazy with some damn carrots. Get it in you and you’ll thank us when you’re hoisting the championship cup.

Keeping tabs on grown-ass adults isn’t what we are about. However your goalie is the one player you can’t play with out. Someone should know his room number. It’s not a horrible idea to give him a early-morning wake up call either. If he forces you to pay his tourney fees you have every right to force him to room with the team’s most responsible player.

Bosses get corners offices so be a beer league tourney boss and get a corner room at your hotel. Do whatever you can to get one player in a corner room. Fewer neighbors sharing walls means less noise complaints from the hardos that go to sleep at normal hours. Not to mention it gives you more room to air out your gear if the Draft Tournament doesn’t let you keep the locker rooms overnight.

Up the ante by getting team shirts, team track suits,  or hell even showing up in costumes. This is the best tip we can give to teams with lots of single chicks or dudes. It makes your team stand out, gets lots of positive attention and gives you an easy icebreaker when you want to chat up that hottie at the bar. Plus, everyone wants to party with the fun team!

Another way to be the team every one wants to hang around… The Shotski. Never heard of it? Let me change your life. 4 or 5 shot glasses along a hockey stick. Plastic prefered. Fill em up and practice your teamwork taking shots together! This thing kills in the parking lots and at the Draft Tournament. Fair Warning, not usually welcome at the bar, ya know because it could also be used as a weapon. But use that beer league charm. Tell the bar manager that more shots = more sales.

Lastly, don’t be the guy or crew at the tourney that is so focused on hoisting the hardware that your forget what beer league tournaments are all about. Hanging with the crew, slammin’ sodies, and playing some puck. Above everything is to have a little fun eh. What’s point if you’re not going to do that? 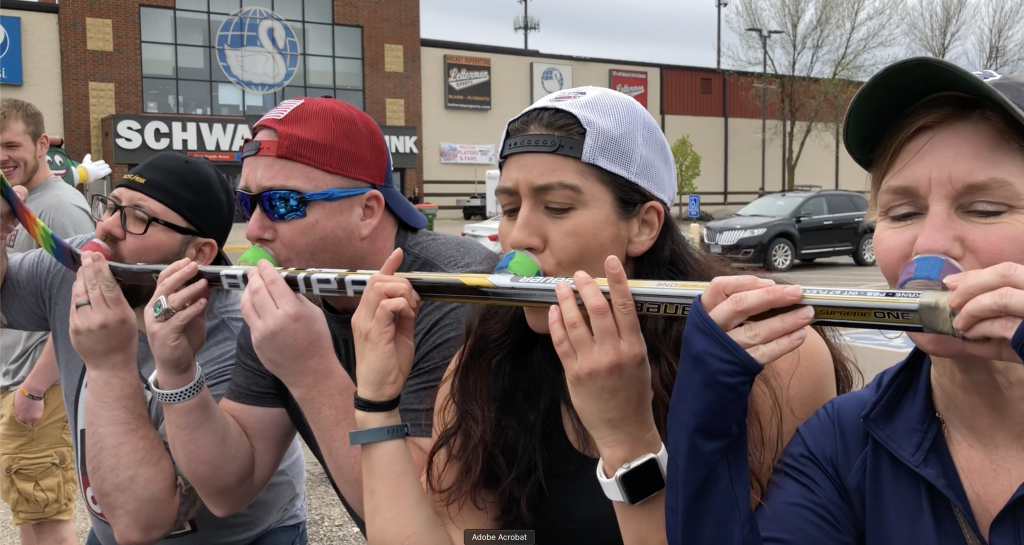 The BLPA guarantees that if you use this guide at the next tourney you’ll have a kick ass time. We are petitioning all tournament providers to send this to every play before the tourney. But they likely won’t so it’s up to share this. Be a buddy and a tell a buddy.

Have other awesome tips to help survive beer league hockey tournaments? Let us know about them in the comments or on twitter @TheBLPA