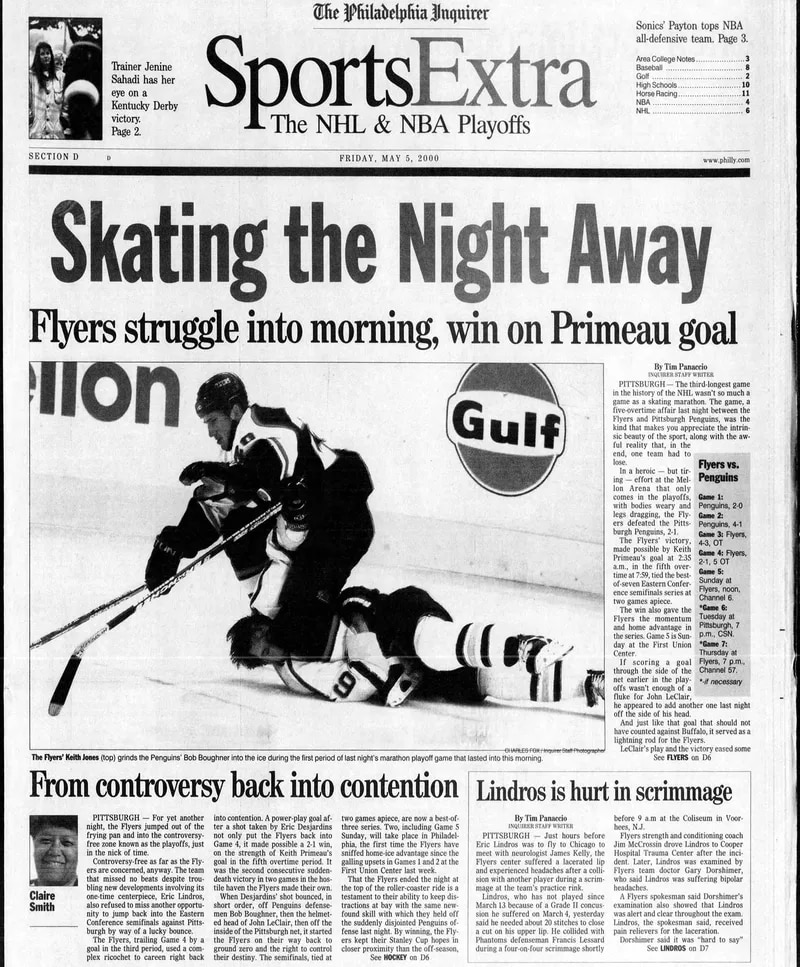 STATE COLLEGE, PA — It was May 4, 2000. Peter and Kathryn had only been dating for about a month at this point. They were going to watch Game Four of the Eastern Conference Semifinals between the Philadelphia Flyers and the Pittsburgh Penguins. The Flyers were the #1 seed in the east, while the Penguins were the #7 seed. The Penguins had advanced to the second round by beating the #2 seed Washington Capitals four games to one. Even then, the Capitals were known for their playoff foibles.

Peter and Kathryn ended up at a favorite State College bar known as Sports Center. It was later known as Sports Cafe (and is now closed) after being sued by ESPN over the name. Neither realized how epic that game was going to be.

Peter, a Pittsburgh area native, was feeling confident since the Penguins held a 2-1 series lead. Kathryn, a Chicago area native, was torn between both teams since her best friend in college was from the Philadelphia area. The Flyers fans were also feeling some momentum from their game three overtime win, and Kathryn was cheering a bit more for the Flyers than for the Penguins.

The game didn’t start out well for the Flyers. Alexei Kovalev scored just 2:22 into the game. Statistically, teams that score first go on to win the game 67% of the time, so Penguins fans were feeling confident. The game was also being contested at the Mellon Arena, the Penguin’s home barn. They took this lead into the third period. At 4:43 in the third, Martin Straka got a slashing penalty and then Flyers defenseman Eric Desjardins took a point shot that was deflected in by John LeClair. The power play was converted in four seconds, and the game was tied. The goal had to be reviewed as the puck defected in off of LeClair’s helmet. The goal stood, and the game went into the first overtime period.

The Flyers almost ended it 31 seconds into overtime when John LeClair got the puck behind the Penguins net and passed in the slot to Daymond Langkow. Langkow hit the crossbar. After that, the rest of the overtime was an uneventful back and forth with no resolution. The second overtime had the same fate. There was going to be a third overtime.

At this point, it was time for Sports Center to close. They allowed everyone in the place to stay, but didn’t let anyone new in. They continued to serve beer to the tense mix of Flyers and Penguins fans. The entire third overtime went by and still there was no winner.

In the locker rooms, the teams put out spreads of power bars, pizza and other foods. Keep in mind that at this point, the teams had played the equivalent of a double header. They tried to keep the mood loose and to keep morale up.

The fourth overtime period began. The players looked tired and the play was sloppy but nothing of note happened again and the fourth OT period ended. At this point, the locker rooms (including the ref room) were all out of food and the players were tired. It was no longer loose. Trainers and staff were scrambling to buy anything they could from the concessions or from the outside, as not many places were open at this point. It was well after 1:00 am on Friday morning.

The fifth overtime was about to begin. The players were just willing themselves along, wishing for the game to be over. Players were on autopilot, just going through the motions. Finally, 12:01 into the fifth overtime, Keith Primeau wristed a short-side shot over the glove of Penguins goalie Ron Tugnutt, and the game was finally over. It had begun at 7:38pm on Thursday and ended at 2:35am on Friday, for a total length of 6:57. In game time, it was a whopping 152:01 long, the equivalent of more than two and a half games. It was the third-longest game in NHL history, but the longest in what is considered the modern era (since the 1943-44 season). Penguins fans in the half-empty stadium were filled with disappointment although the series was not over. It was tied 2-2.

For the Penguins, Jaromir Jagr led the team with 59:08 of ice time, more than any of their defensemen. The top defenseman will usually lead a team in ice time, so this was notable. Ron Tugnutt saved 70 of 72 shots for a save percentage of 97.2%. For the Flyers, Dan McGillis led the team and game with 61:05 of ice time. Brian Boucher saved 57 of 58 shots for a save percentage of 98.3%. Tugnutt was the first star of the game, and Boucher was the second star. Of course, Primeau was the third star by virtue of ending the whole affair.

The Flyers ended up winning the series in six games. This was remarkable because they played the whole playoffs without their star player Eric Lindros, who had been expected back after suffering a concussion, only to get another concussion in practice earlier in the week. The Flyers ended up losing a seven game series in the Conference Finals to the New Jersey Devils, who eventually ended up winning the Stanley Cup. Eric Lindros did return in game 6 of the Conference Finals, playing about 15 minutes. In game 7, he lasted two minutes before getting hit by Scott Stevens and suffering another concussion. It was also his last game as a Flyer as he was traded to the Rangers in the off-season. A notable condition of the trade was that the Rangers would get a draft pick if Lindros suffered a concussion that kept him out for 12 months or longer. He didn’t, although he did suffer his eighth official concussion the next year with the Rangers. He played a few less productive years with the Maple Leafs and Stars until retiring at 34, due to his propensity for concussions.

As for Peter and Kathryn, their relationship continued throughout the rest of college and beyond, and they ended up getting married four years later. Fast forward one dog and two kids, they are now celebrating their 16th wedding anniversary. Did this game have anything to do with it? We’ll never know. But they do say that people who experience intense things together are forever bonded by them.