For the next blog in our ‘By The Numbers‘ blog series, we tackle… hockey jersey numbers. Hockey jersey numbers in professional hockey date back to the old National Hockey Association, one of the leagues that pre-date the NHL. The original intention oh hockey jersey numbers was to help fans identify players and to help officials to credit statistics. An added benefit was that they could generate revenue selling programs that listed the players by number. This continued until the 1977-78 season, when the NHL began requiring nameplates added to the uniforms. A revision to this rule was required shortly thereafter when the notoriously cheap Harold Ballard, owner of the Toronto Maple Leafs, begrudgingly complied by adding the nameplates in the same color as the uniform. He didn’t want to lose the program sales, so the NHL had to be specific that the nameplate was to be in a contrasting color. 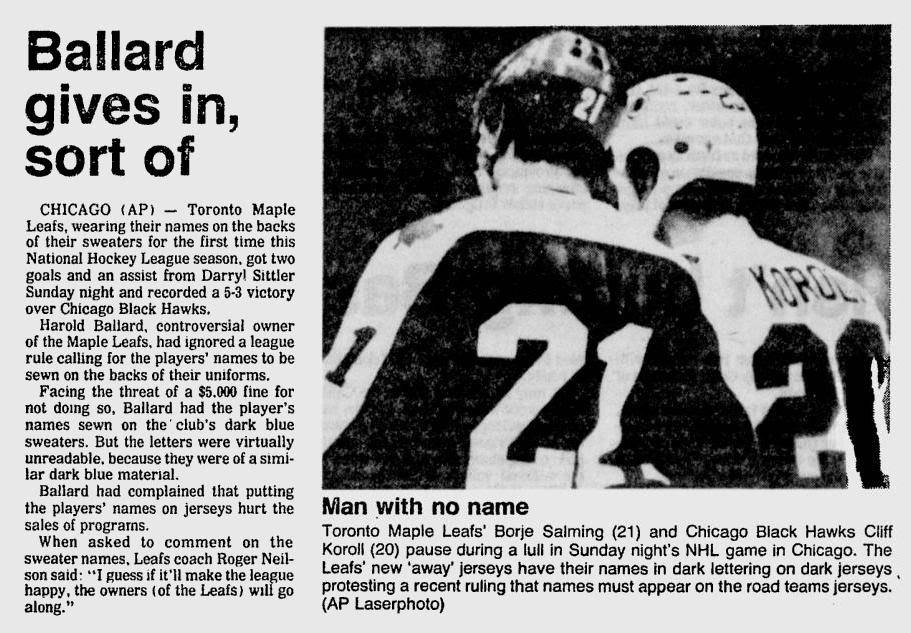 There are some unwritten rules that specify which hockey jersey numbers players can wear, based upon tradition and history. The most commonly known of these is that hockey jersey number 1 is reserved for goalies (Roberto Luongo jokes aside). You have to go back to at least the ‘50s to find any instances of a non-goalie with this number. Soccer has this in common with hockey. Numbers 2-6 were traditionally for defense, and 7-11 traditionally for forwards. Higher numbers were for players further down the depth chart, with one of the highest numbers (often 20, 29 or 30) for the backup goaltender. On many teams, a lower number implied status, as this would allow for better hotel or sleeping car accommodations when traveling.

Today, 1 is still reserved for goalies and 2-5 are almost exclusively for defense (with the notable exception of Charlie Coyle of the Wild). 30, 31 and 35 have also become the exclusive domain of goalies in the time since, with Chris “Knuckles” Nilan being one of the last non-goalies to wear 30. There was a time when 29 was also very common among goalies, but that has changed. Out of the 13 rostered NHL players wearing 29 now, 8 are forwards, four are defense and only one is a goalie. Almost nobody ever wears 66 or 99 in the NHL due to Lemieux and Gretzky, with 66 being unofficially retired and 99 being officially retired. 69 is rarely used (nobody is presently wearing it, and likely won’t unless Doug Glatt is called up), likely for the sophomoric response that it would elicit. Higher numbers are becoming more common every year, although presently the only number higher than 50 that is worn by more than 10 players is 77. Numbers 0 and 00 have been worn in the past (mostly by goalies including John Davidson and Bernie Parent) but are no longer allowed by the NHL. And it goes without saying that asking to wear 67 in Toronto probably wouldn’t be the best idea.

In beer league hockey, these traditions filter down but are often exceptions. Sometimes players base their numbers upon other sports they’ve played. Sometimes they don’t know or don’t care about tradition. If a beer league forward chooses number 1 or a goalie chooses number 2, it would look weird but nobody would really care. Players could even choose 00 or three-digit numbers. The only number choice that will get a beer league player ridiculed is if they chose to wear 66 or 99 (and 8 if they also have the requisite mirrored visor).

In some sports, a specific uniform number is worth so much to a player that they will pay big money to buy it off of a teammate. When Deion Sanders joined the Cowboys, he bought a teammate a new BMW in exchange for number 21. Although you really don’t hear about this happening in the NHL, that doesn’t make the numbers any less important to the players. A young player (unless a superstar themselves) would always give a veteran their number without even being asked, because that is what hockey players do.

With that said, some players really don’t care which number they are given. Duncan Keith wears 2 because it was hanging in his locker when he reached the minor leagues. Nate Schmidt was an undrafted player with Washington and was given 88, which he didn’t like because it was too high. Now on the Golden Knights, it has become attached to his career. Rookies (star players aside) are generally given little to no choice over which high jersey number they want.

Players often come up with interesting substitutions when their preferred number is taken. Wayne Gretzky chose 99 because the number he wanted (9) was already taken on the 1975 Sault Ste. Marie Greyhounds in the OHL. He wanted 9 due to that being Gordie Howe’s number. 19 has been a prolific number among number one centers and team captains, with players such as Steve Yzerman, Joe Sakic, Nicklas Backstrom and Jonathan Toews wearing it. Steven Stamkos and John Tavares both grew up wearing 19 earlier in their amateur careers, and chose to reverse the numbers to 91 when 19 wasn’t available. Alexei Yashin had 19 in Ottawa for this same reason but when that number was unavailable on the Islanders he chose to turn 19 into 79 instead of reversing the digits. Doubling up a number is also common, which explains why numbers such as 44 and 55 are so popular. Phil Esposito chose 77 for the Rangers when 7 wasn’t available, and Ray Bourque chose to switch from 7 to 77 when Phil’s number was retired by the Bruins. He did this out of respect (he would have been allowed to keep 7 until he left the Bruins), complete with a dramatic reveal of him pulling off his 7 jersey only to have the 77 already on underneath (watch here).

For star players, the number chosen is a big part of their identity and marketing for the NHL. This started when Gretzky organically came about using 99. Mario Lemieux was the next with 66, having chosen that on the advice of his agent (who was also Gretzky’s agent) who though he needed a number to rival the Great One. Lemieux had previously worn 28 because that is what his brother wore. The next superstar to do this was Eric Lindros with 88. He had worn 8 in tribute to the late John McCauley, a family friend and retired NHL referee who passed away in 1989 (it was his NHL referee number). He chose 88 when number 8 was already in use on the Oshawa Generals of the OHL. Sidney Crosby chose 87 because his birthday is August 7, 1987 (8/7/87) which is actually one of the most awesome things that I have ever heard (despite what anyone thinks of him, you have to admit this is cool). Of course, Connor McDavid took 97 for his birth year and since 97 is not a common NHL number, it has taken on a similar status.

There are actually many “birth year” numbers (and it is more of a recent trend) as every number between 87 and 98 is worn by at least one player (except 94. Andrei Mironov wore it last year for the Avalanche, but is now playing in the KHL). Some of the big names include 88 by Patrick Kane, 89 Sam Gagner, 90 Marcus Johansson, 91 Teresenko, 92 Landeskog, 93 Nugent-Hopkins, and so on….

Teams also retire numbers. The Boston Bruins have retired almost every number from 2-9 with Cam Neely’s 8 being the most recent. When Joe Thornton was drafted by the team in 1997 they gave him the only unretired number in the group (6 ) with the expectation that it would be retired one day. Having the only single-digit number was prestigious. Joe eventually changed to 19 as many star centers and team captains do and 6 is still available for the Bruins (although nobody wears it presently, meaning the Bruins lowest number used is 10 as no goalies there wear 1). Pat Verbeek wore 15 and Brett Hull wore 17 for the Red Wings instead of their customary 16 because 16 has been unofficially retired ever since the accident that paralyzed Vladimir Konstantinov.

Sometimes the number represents something more meaningful, often the date of a historical event. Jaromir Jagr chose 68 due to the events in 1968 Czechoslovakia which led to the democratization of that country. Petr Klima chose 85 and  Alexander Mogilny chose 89 because those were the years they defected from Czechoslovakia and the USSR, respectively. Alexander Ovechkin chose 8 because his mother Tatyana wore that number when she won women’s basketball gold medals in 1976 and 1980 for the Soviet Union.

There are also some funny reasons a player chooses a number. Both Steve Heinze and Shawn Heins took number 57 (Henry Heinz proudly advertised his 57 pickle varieties back in 1896). Jordin Tootoo chose 22, and flipped it over to be 55 when 22 wasn’t available. Kevyn Adams chose 42 while on the Maple Leafs because in the book The Hitchhiker’s Guide to the Galaxy, 42 is “The ultimate answer to life, the universe and everything.” One of the saddest things ever in NHL history is that Mike Commodore never chose to wear 64. In his last stint (with the Red Wings) at the end of his career he was this close to doing it, but alas…he did not. 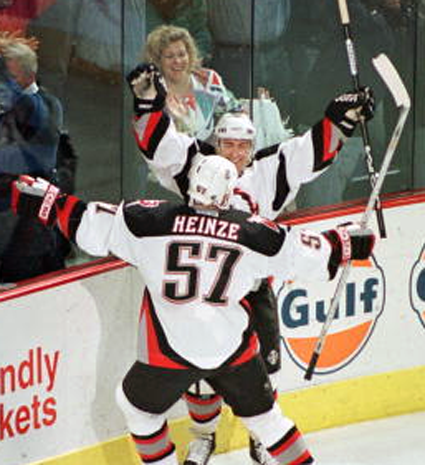 Why do beer leaguers choose their numbers? Nick Fleehart, a handsome and successful Gentleman of Leisure, chose 10 because of his favorite baseball player, Larry “Chipper” Jones. Rumor has it Chipper himself only chose 10 because his beloved 7 was already taken when he reported to the Durham Bulls, by a 58-year-old catcher named “Crash” Davis.

No matter the sport, choosing the number of a favorite player would probably poll the highest. Sometimes you can buy a used jersey from the captain or a departing player and you take whatever number is on that jersey at a discount. Perhaps a single-digit number such as 4 looks a lot better than 44 when you hear that each digit costs $16 and you’re getting a stitched home and away set. Maybe you choose something sentimental such as an important date. Obviously as a way to share your anniversary with the world, not as a way to remember it in the first place. When it comes to using tape to create numbers on blank jerseys, nothing ranks higher than 1, followed closely by 11. Speaking of 11, my daughter (a future beer leaguer in training) wears 11 as a mite because of her favorite player.

Statistics were compiled based on the rosters shown on espn.com as of 10/5/2018. There are some interesting trends in the hockey jersey numbers choose, as well as some interesting outliers.

For goalies, there are only 21 unique hockey jersey numbers. The top goalie numbers:

It is interesting to note that while use of 1 has been trending down, it is still the third most common number. Interesting outliers are Oilers goalie Mikko Koskinen with number 19 and Canucks goalie Jacob Markstrom with 25. Numbers 1, 30, 31, and 35 are only worn by goalies.

For defense, there are 66 unique jersey numbers. The top defense uniform numbers:

For forwards, there are 85(!) unique numbers. A lot of these are high numbers only worn by a handful of players each. The top forward numbers:

Forwards also use their most traditional hockey jersey numbers (9, 10 and 11) frequently. Numbers in the teens or low 20s are the most common. The most interesting outlier is the Wild center Charlie Coyle with number 3. 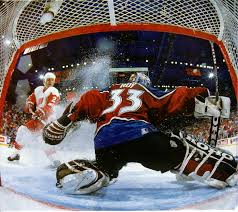 Maybe next time you watch a game or choose your own number, you will look at the uniform numbers differently. Hopefully this is a good thing. Honor the tradition or blaze your own path? Although, if you’re a goalie or have influence over a young goalie, I am a big proponent of bringing the number 1 back to its former glory.

If you’re reading this you’re probably an adult “athlete” or at the very least a sports fan. Did you know we have a podcast that we made just for you? If you like what we are doing we’d be so stoked if you subscribed on iTunes, or  Spotify. We’d be even more stoked if you were able to rate and review us too. Thank you beauts so much for the support.