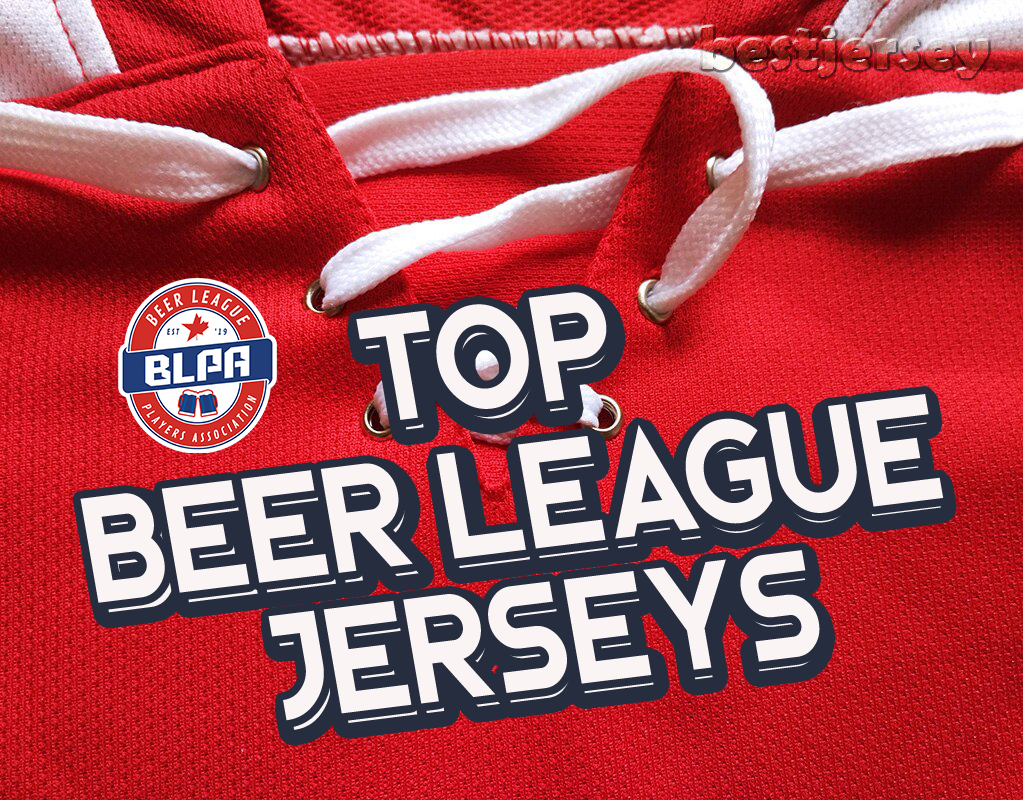 It is safe to assume that we here at the BLPA have some authority when it comes to bad ass beer league hockey jerseys. We create thousands of jerseys a year for players at our Draft Experience tournaments. Basically what I  am trying to say is I am giving you our jersey credentials because I am about to do a beer league jersey blog here. It’s so hard to pick and choose which are “the best” so I’m not going to call it a top 10 blog. There are just too many.Thus I am simply going to call this TOP BEER LEAGUE JERSEYS and this will be volume 1.

This isn’t going to be an ego stroking post. Meaning  I’m not here  to post all of our draft tournament jerseys and say all of our jerseys are the best. Selfishly I do believe we have some top contenders for best beer league hockey jerseys but beauty is in the eye of the beer holder. So instead of saying our jerseys are the best we will just start off the blog by posting 2 or 3 of my favorite DEX jerseys to get them out of the way.

from the 2020 Cleveland Draft Experience 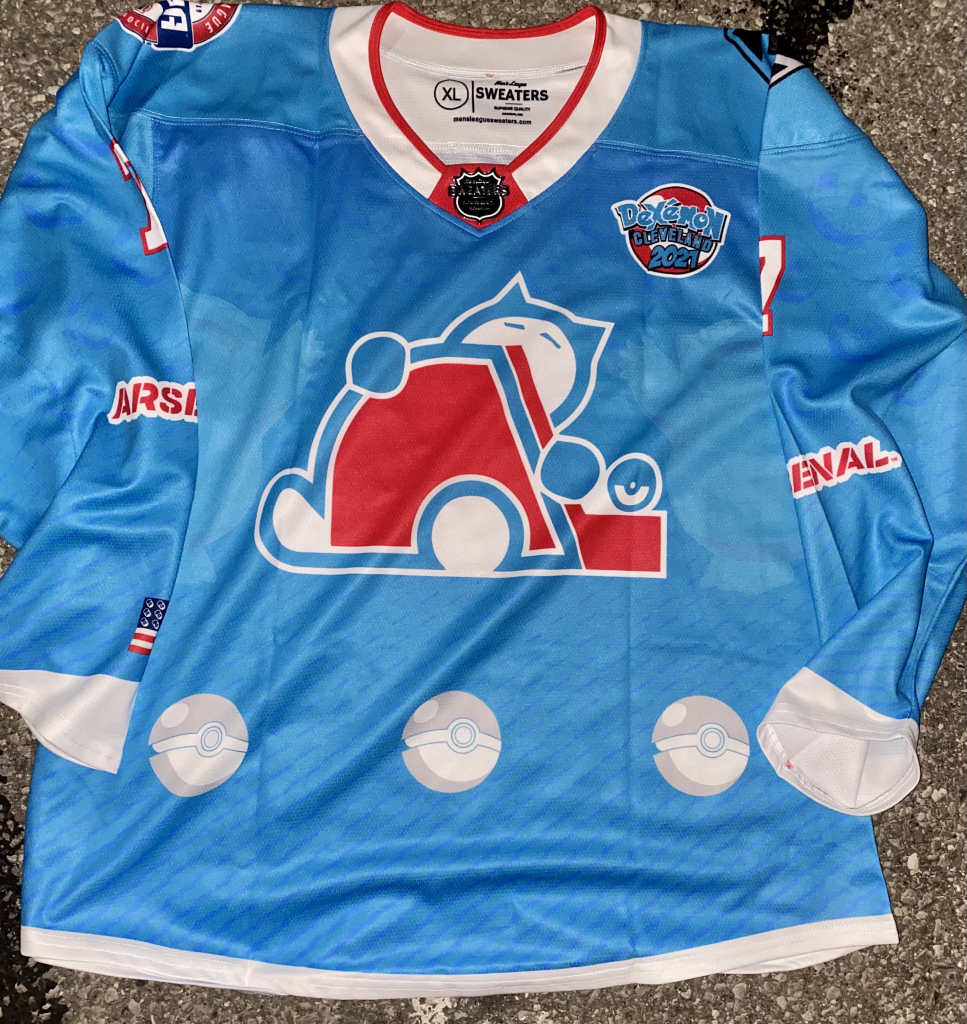 All of these Star Wars beer league hockey jerseys 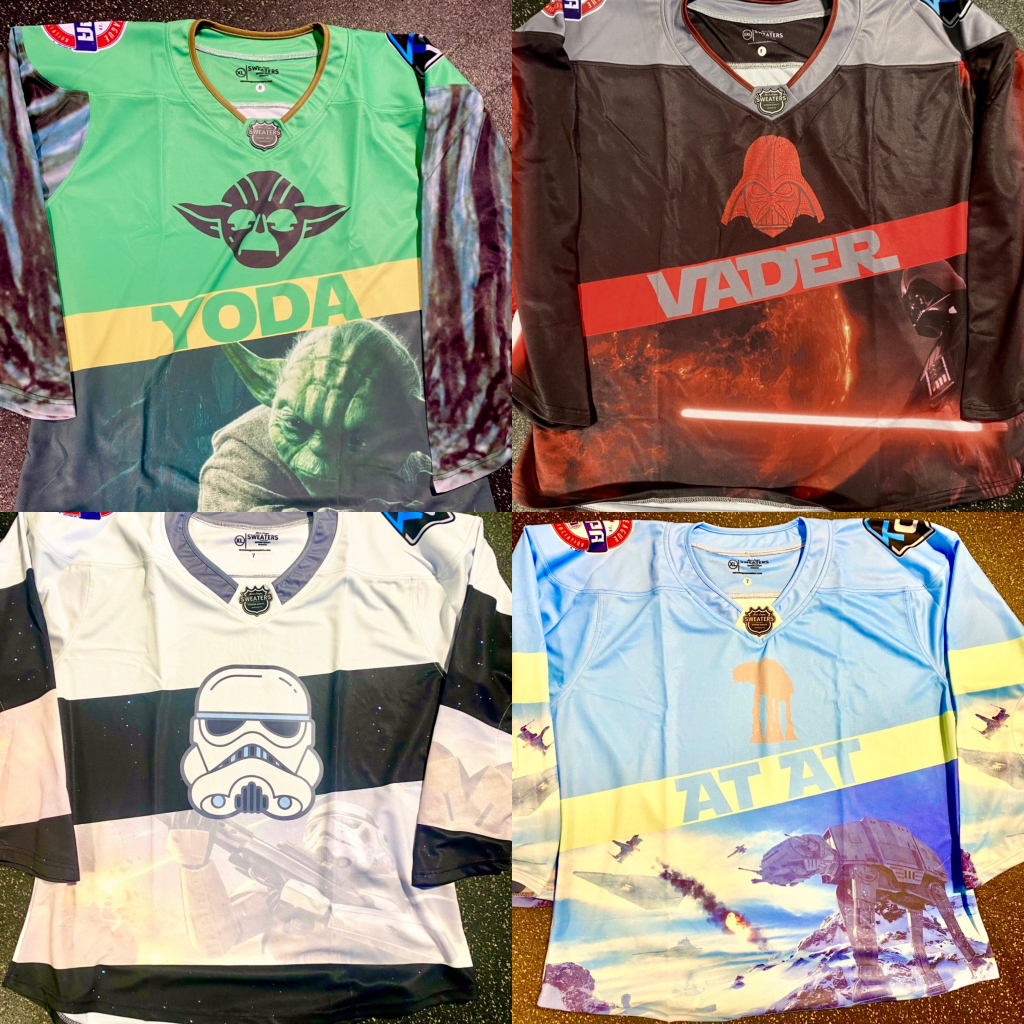 On to beer league jerseys we’ve seen in the wild. One thing you should know about beer league hockey jerseys is that us beer leaguers are immature. We love poop jokes and sexual innuendoes. But beer leaguers are also creative. Any ol’ beer league team can take a sex pun and slap the name on a jersey. But it takes real creative vision to make that sex pun into a logo that won’t get you in trouble when your game is right after a public skate at the city rink. Case in point:

No these boys aren’t British or tea enthusiasts. The are paying homage to one of the most disrespectful things you could do to an online nemesis in 2002 first person shooters on PC. The ol’ tea bag. Is it immature? Hell yes. Is it funny as shit? Also Hell yes! 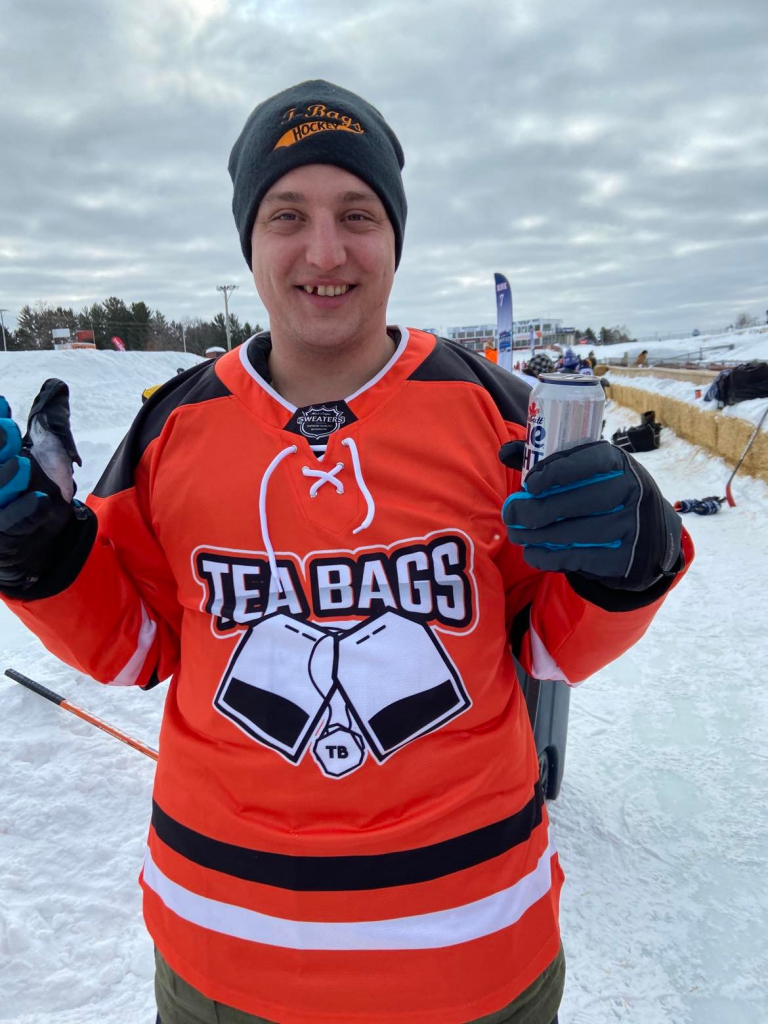 You know you’ve played this team or at least a team like this. Their pregame consists of telling big dick jokes and talking about their latest sexual conquest (PS they are making it up). The best part of these teams is that they fully commit to their team names by making disgustingly awesome beer league hockey jerseys, usually in fully anatomically correct detail. 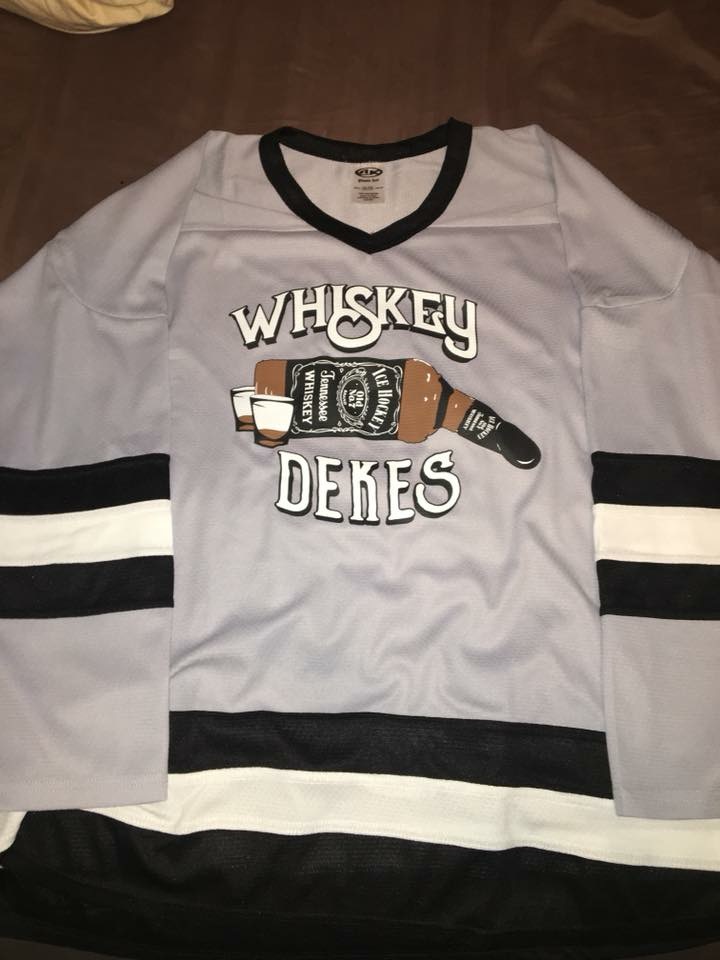 Probably the scariest team you’ll ever play against. We’ve all had a scare like this. How many players have to take the game off for the mental well-being when this team (and their beer league hockey jerseys) shows up on the schedule?  This team has found the ultimate way to intimidate teams and make them laugh at the same time. Well done beer leaguers. 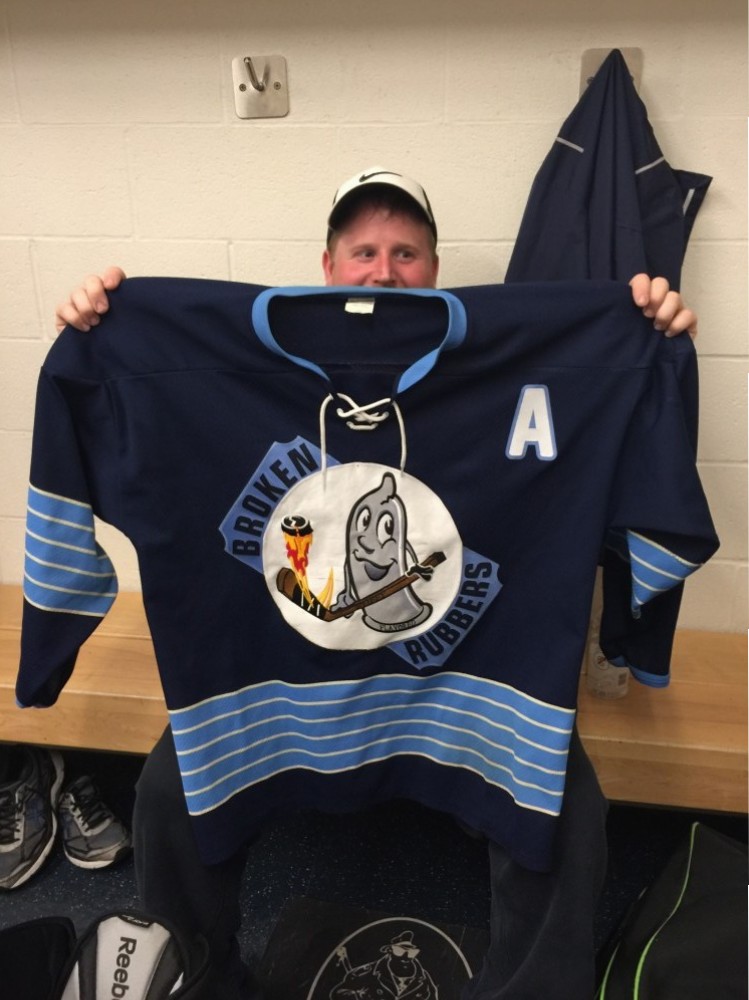 It’s not only da boys that get in on the sexual innuendo for beer league hockey  jerseys. All hockey players love sex jokes. As referenced by the lovely ladies of Money Shots. These ladies will break your ankles and make ya like it. Then they will make ya feel good with their own “money shot” concoction. Seriously they have their own pre/post game drink. Not only is the logo on point but check out them last names. Shout-out to Anita, how you doin?  Great team name, great jersey names, great sense of humor, great work! 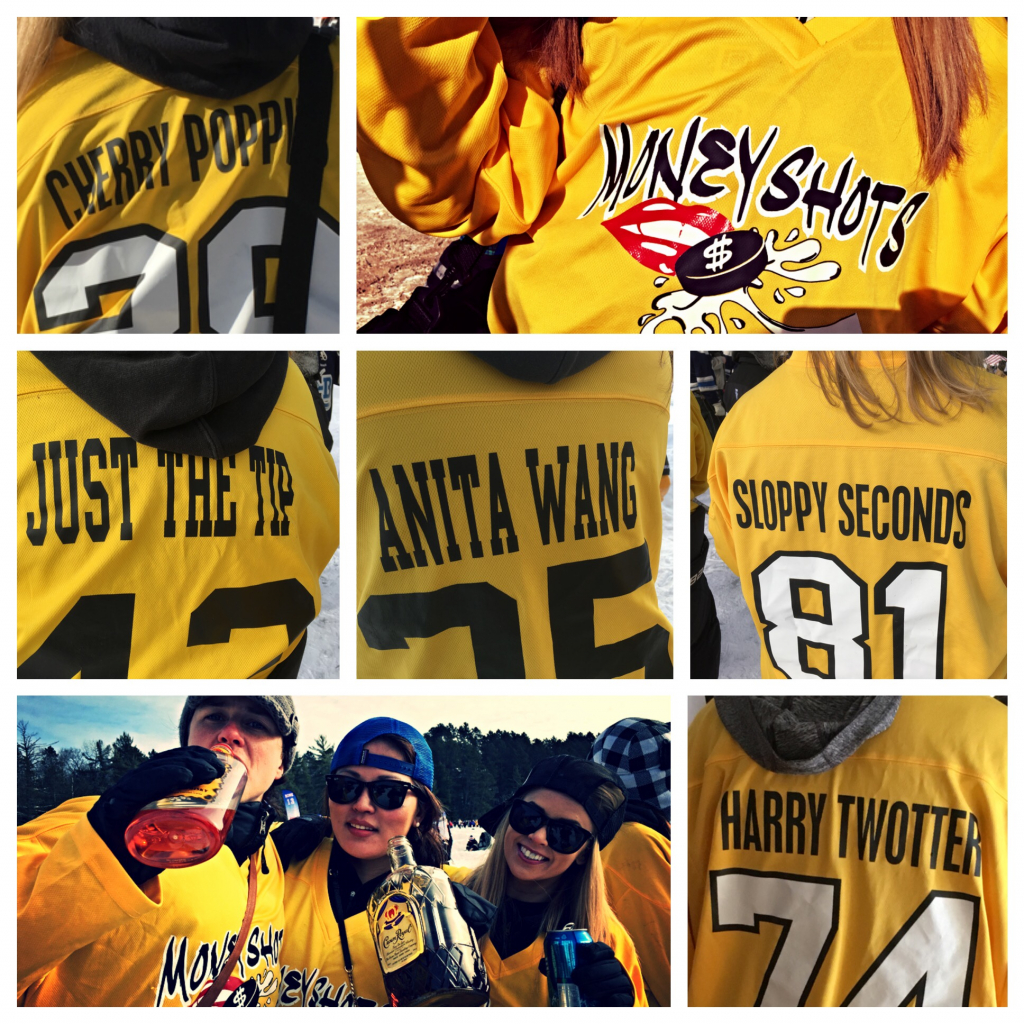 There are just some things in life that go together. Peanut butter and jelly. Cookies and milk. Beer and me. And for this blog’s sake, incredible facial hair and hockey. And because this team knows how to pander to our audience here…. Even a subtle sex joke for us immature beer leaguers. 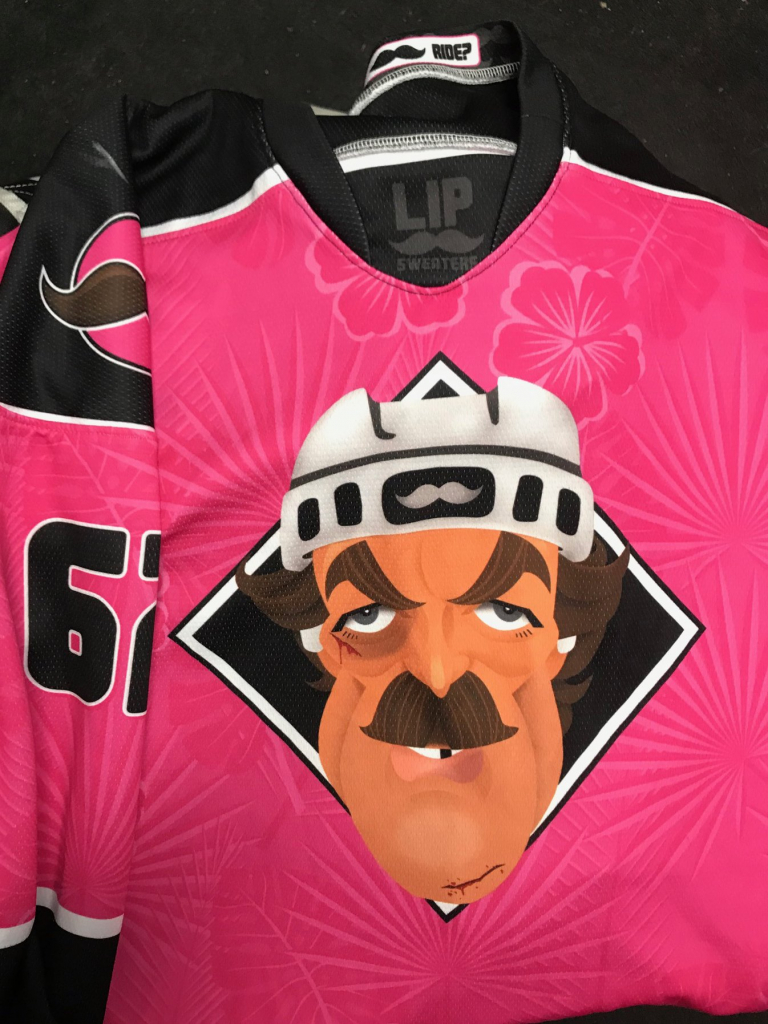 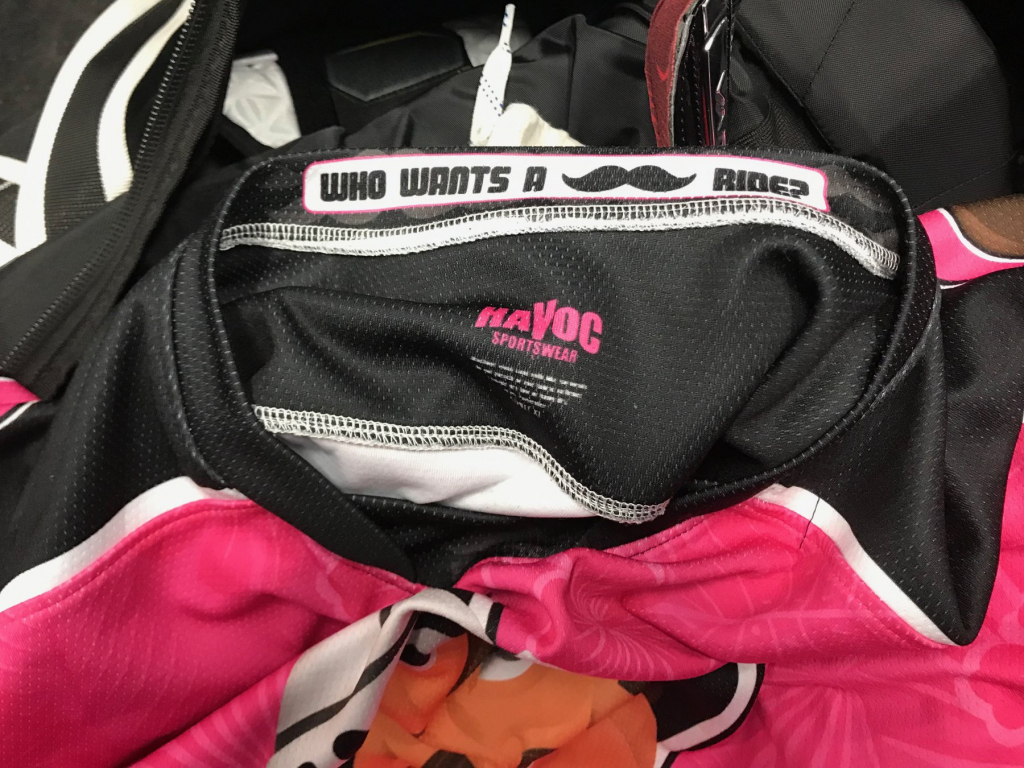 This one is pretty offside But thats definitely on-brand for us. There is nothing fancy about this jersey. Just good old fashioned tongue in cheek humor. 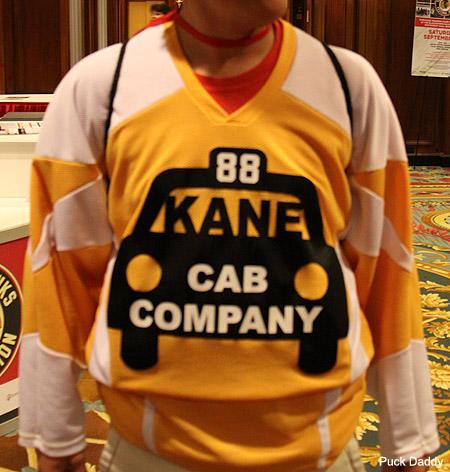 This one made the list because the artist is a certified bad ass artistic beauty. Donovan over at Silverback (in Calgary, Alberta) hand draws these designs and makes them into digital masterpieces. We always love seeing his new designs pop-up. He takes custom commissions for jerseys and all his jerseys are made in North America. Doesn’t matter if you’re a 3rd line hockey player or a super star you deserve to have a bad ass logo like this. 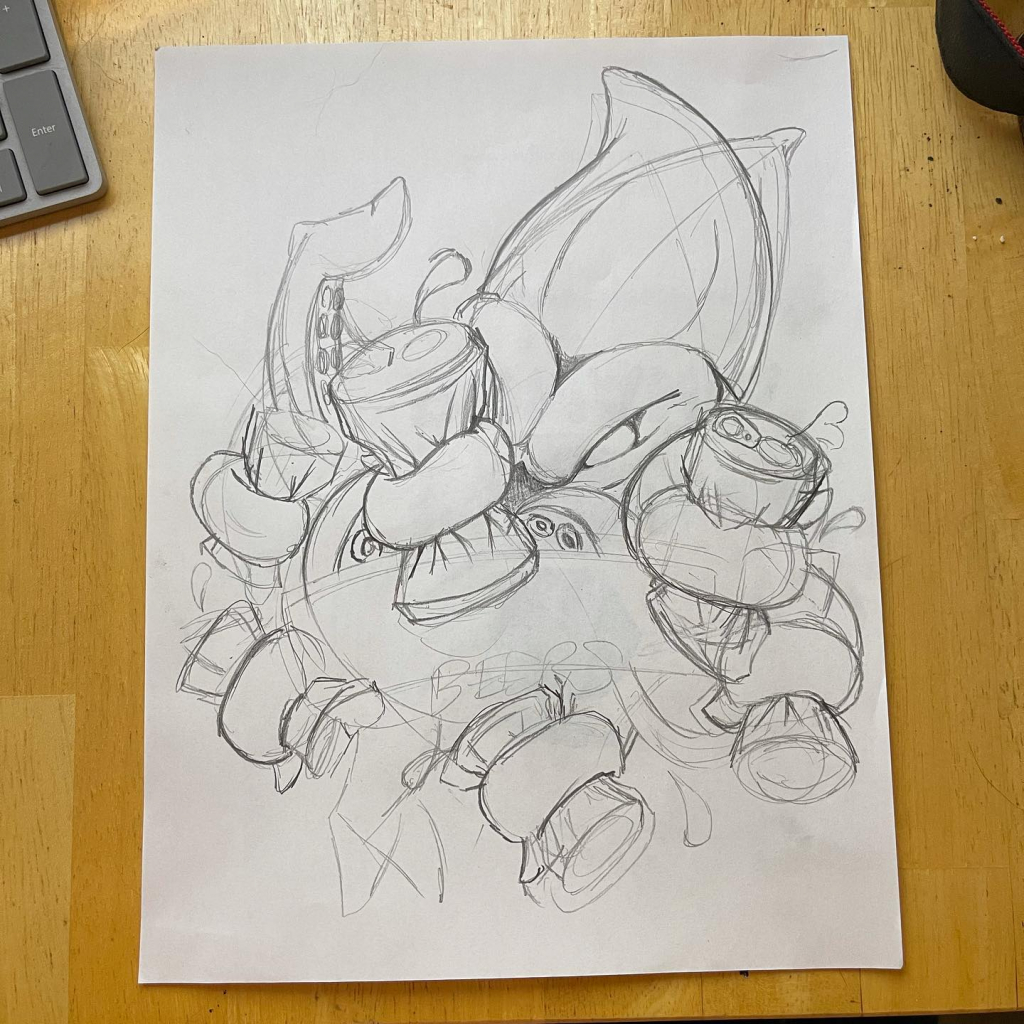 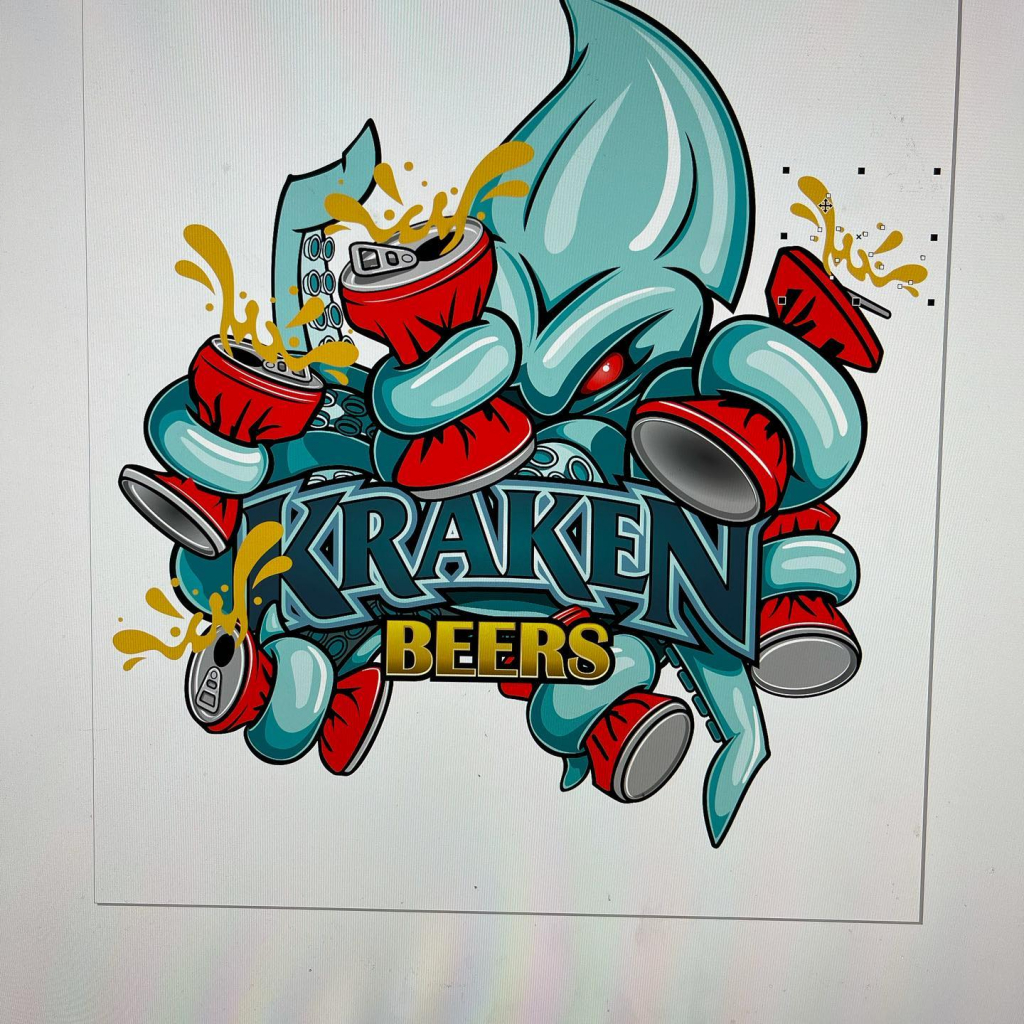 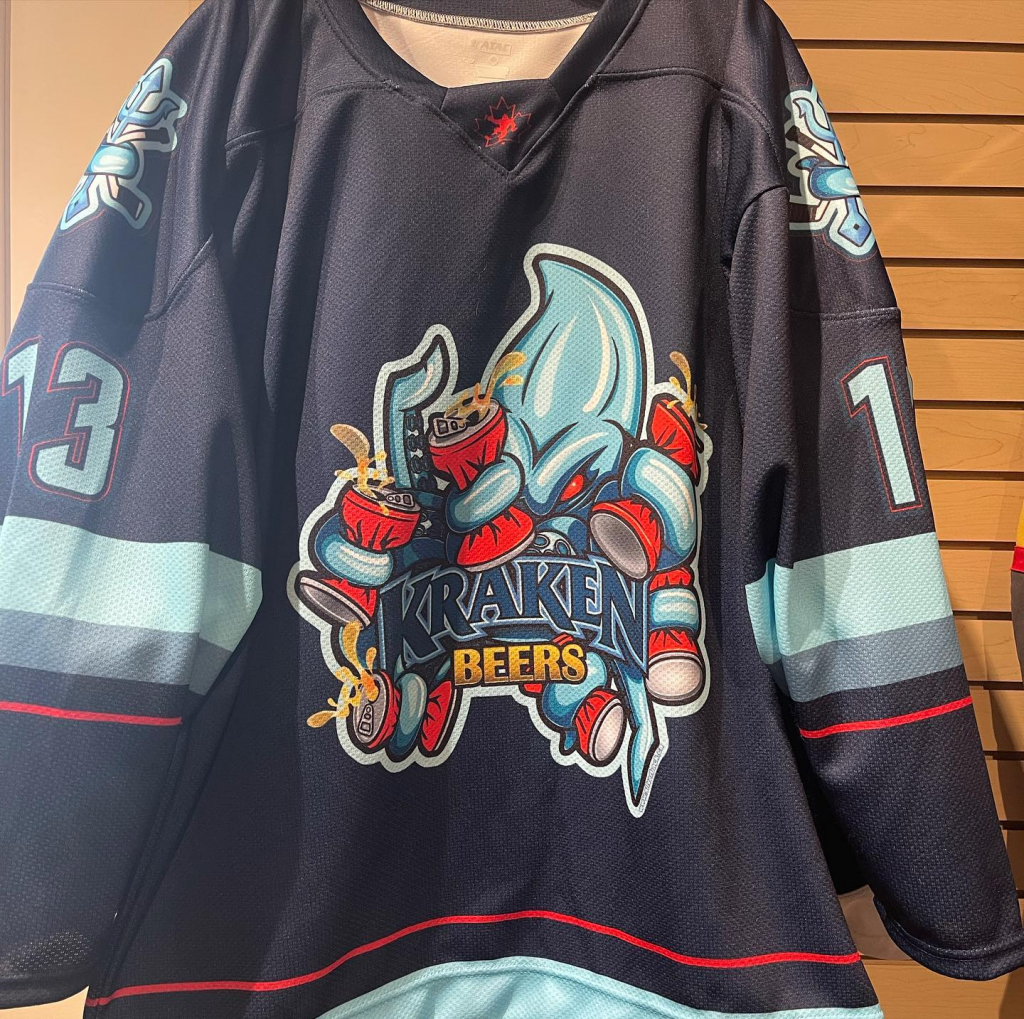 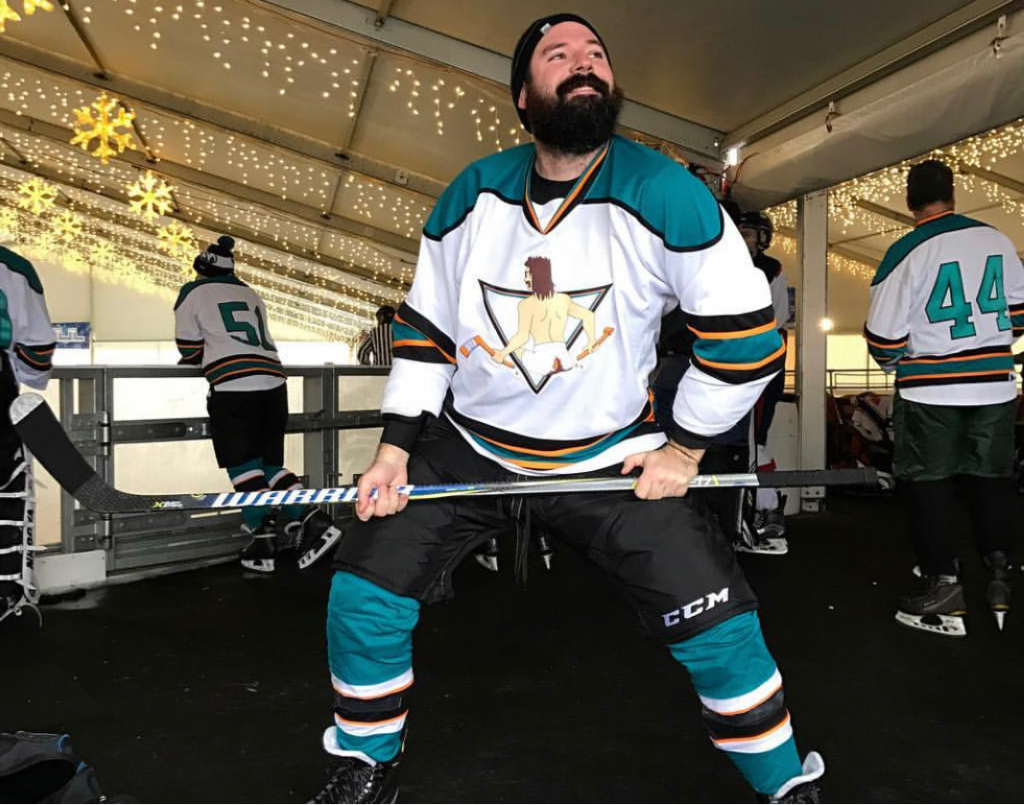 There ya have it. Top Beer League Hockey Jerseys Volume 1. These jerseys can really make 3rd line hockey players feel like 1st line players.  Remember as beer leaguers you can wear whatever you want on the front of your jersey as long as you own it. And that team you’re playing, they are laughing with you, not at you. See ya next time! Do you think your jersey deserves to be featured here?  Tweet us

Oh and don’t be a butt baby! Listen to our podcast on Apple Podcasts or Spotify. 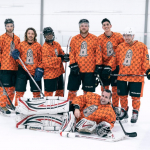